Forum highlights the connections between humans and apes

In the early 1980s, Peter Gabriel sang “Shock the Monkey.” But about 15 years ago, the English musician became more interested in jamming with apes instead.

“I had always been fascinated to see how we might interact musically,” said Gabriel. “I was blown away at the obvious intelligence of the beings that I was sharing the space with.”

The former Genesis singer and solo artist, who has been lauded for his humanitarian efforts, made the remarks during a remote appearance at “Apes and Sustainability,” a forum held Nov. 15 in the A.D. White House’s Guerlac Room. The event brought together an interdisciplinary group of Cornell faculty, activists and scientists to explore new perspectives on preserving nonhuman great apes in sustainable ways.

How adept are apes at musical collaboration? Gabriel showed footage of an improvised session in which a bonobo named Panbanisha tapped away on a keyboard – displaying a knack not only for rhythm, but also melody and pitch – while Gabriel harmonized.

“I think if you compare that with, say, a child experimenting on the piano, there’s a sort of sensitivity there, and it’s very hard for anyone to deny it,” Gabriel said. “There were various occasions we tried playing music together, and it was such an extraordinary experience for me. It felt a bit like being with your forefathers. There was clearly a sort of language that was open and available between us.”

While apes and humans are capable of making wonderful music together, the rise of modern Homo sapiens came at the expense of all other members of the Homo lineage, such as Homo neanderthalensis, which fell extinct over the last 200,000 years, according to the forum’s organizer Laurent Dubreuil, professor of comparative literature, Romance studies and cognitive science.

“If our success and development as a species has been based at least indirectly on the pre-required eradication of the other Homo, it is paradoxically obvious that inventing a sustainable future for ourselves requires we avoid repeating that original sin and take some special care of the other apes,” said Dubreuil, a 2018-19 Social Sciences, Humanities and Arts fellow at the David R. Atkinson Center for a Sustainable Future.

To highlight the natural connection among primates, Dubreuil is collaborating with Cathy Caruth, the Frank H.T. Rhodes Professor of Humane Letters in the Departments of English and Comparative Literature, for the Ape Testimonies Project. Modeled on the holocaust video testimonies established at Yale University, the project documents via video interviews the personal experiences of people who have had profound interactions with apes, experiences that science alone cannot sufficiently communicate or explain.

In addition to capturing the perspective of humans, the project also explores the often-enigmatic communication between humans and apes.

Ensuring a sustainable future for apes is not only important because they are humankind’s closest relative; their survival also has implications for planetary health, according to Robin Radcliffe, senior lecturer in wildlife and conservation medicine and an Atkinson Center fellow.

“Great apes are a very critical conservation priority,” said Radcliffe. “We know that the health of humans, animals and the environment are closely linked. We know humans and apes have a singular connection because of shared physiology, biology and genomic codes. And we also know they have remarkable cognition and learning. The great apes may foretell a future for humans – if we cannot make space for the apes, how will we preserve diversity in the rest of the animal kingdom? This is something scientists increasingly connect with our own future.”

Sally Coxe, co-founder and president of the Bonobo Conservation Initiative, echoed that sentiment and presented the work of her grassroots organization in the Democratic Republic of Congo.

For Sue Savage-Rumbaugh, professor emerita of biology at Georgia State University and president of the Bonobo Hope Initiative, humans have plenty to learn from nonhuman primates.

“Their intelligence has gone on and it’s evolved and it’s doing things we don’t understand. It has a sensitivity. It has a beauty. It has a creativity,” she said. “My feeling is if I hadn’t understood bonobos, I would never understand myself. I wouldn’t know how to appreciate myself, I wouldn’t know how to appreciate others. They really taught me that. And I think the human species is coming to a time where it needs to understand that in a new way, and if it doesn’t protect them, it won’t have that opportunity.”

The forum was sponsored by the Atkinson Center, the Society for the Humanities and the Department of Romance Studies.

David Nutt is managing editor for the Atkinson Center.

This story also appeared in the Cornell Chronicle. 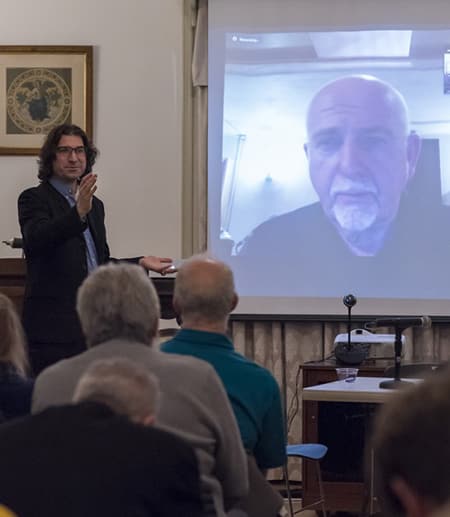